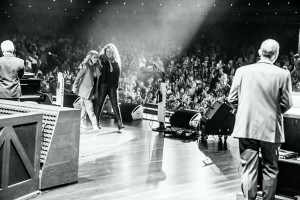 Country singer-songwriter Brooke Eden surprised a packed Opry House this past Friday night with a guest appearance from Trisha Yearwood during her set. After a stunning performance from Brooke of her latest songs, “No Shade” and “Sunroof,” Brooke began her performance of her country classic pick, Yearwoods’ “She’s In Love With The Boy.” After the first chorus, Trisha appeared and suggested they do a gender flip of the song to highlight Pride month and Brooke’s recent engagement, continuing their duet as “She’s In Love With The Girl.”

Yearwood recently re-recorded her breakout 1991 debut single “She’s In Love With The Boy” for its thirtieth anniversary. The new acoustic version will appear on her upcoming Every Girl: Deluxe album out August 13.

“Never in my wildest dreams did I imagine I’d ever share the stage with one of my heroes, Trisha Yearwood,” said Eden. “Her idea of changing the words of ‘She’s In Love With The Boy’ to include Hilary and my love story is such a beautiful way of putting action behind the quote, ‘Love Is Love.’ Thank you to Trisha and the Opry for helping to create a community of love and acceptance. This is country music.”

Brooke Eden made her triumphant return to country music earlier this year. Marking the end of her four-year hiatus, she shared three new songs – “No Shade,” “Sunroof,” and now “Got No Choice” – as a trilogy of sorts. These songs are the manifestation of having taken the time to become confident in who she is and who she loves. Collaborating with director Ford Fairchild to create each video, Eden was able to incorporate her fiancée, her hometown, and even the bar at which she grew up singing, into the music videos that so authentically give the viewer a glimpse into Eden’s world.

Earlier this month, Brooke performed at OUTLOUD: Raising Voices featuring Pride Live’s Stonewall Day in Los Angeles, CA, and she is set to perform at CMT’s Concert for Love and Acceptance on June 30th. Eden will return to the historic Exit In in Nashville, TN, the venue from which she was originally signed, to play her first Nashville headline show on Thursday, July 22nd, with support from Spencer Crandall and Telemitry. This will mark the venue’s first country show since closing for the pandemic, and tickets are currently on sale HERE.