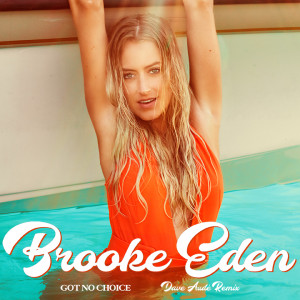 “Dave Audé really put his special sauce on this one,” says Brooke. “I can’t wait to dance to the ‘Got No Choice’ remix with my go-go boots on and a Paloma in my hand!”

“I had so much fun remixing ‘Got No Choice,’ and I’m super excited to play it at club and Pride Events the rest of the year,” says Dave Audé.

In celebration of the release, Brooke will be appearing at the following festivals this fall:

Originally released in May, “Got No Choice” was penned by Brooke, Jesse Frasure, and Cary Barlowe and was the third and final track to Eden’s reintroduction trilogy. Marking the end of her four-year hiatus, she shared three new songs – “No Shade,” “Sunroof,” and “Got No Choice” – as the manifestation of having taken the time to become confident in who she is and who she loves. Collaborating with director Ford Fairchild to create each video, Eden was able to incorporate her fiancée, her hometown, and even the bar at which she grew up singing, into the music videos that so authentically give the viewer a glimpse into Eden’s world.

Eden’s trilogy of songs were received with much critical acclaim:

“Eden hopes her latest series of songs will inspire people looking for silver linings in their struggles.”

“Eden has literally and metaphorically come into full control of her life in the country music scene.”

Displaying her signature vocal swagger, Eden’s trilogy of songs allows listeners to follow each step in her journey from her 2017 breakout single, “Act Like You Don’t,” to her current outlook. The first song and video released in the trilogy, “No Shade,” kicked off the intertwined narrative. The wildly infectious melody and throw-back flare of her second track, “Sunroof,” co-written by Eden, Sarah Buxton and Jesse Frasure, draws as much from the Supremes as it does from Nashville’s current country stylings. The resulting sound reflects Eden’s newfound levity, and perfectly combines the artist’s soulful and country influences into a fresh new direction. “Sunroof” was the first song created with Eden’s refreshed sound in mind. Led by Jesse Frasure (Thomas Rhett, Florida Georgia Line, Kane Brown, Marshmello, Meghan Trainor, and more), the three buoyant new tracks were produced by him. The accompanying video has not only amassed over seven million views, but also hit #1 on iTunes 48 hours after its premiere, beating out Silk Sonic (Bruno Mars and Anderson Paak) for the #1 all-genre position, and was recently nominated for the 2021 CMT Awards as Best Family Feature. Years ago, when prompted by a former executive on her team to choose whether she would like to be a signed artist or visible with her girlfriend, Eden answered by writing the conclusion of her trilogy, “Got No Choice.”

Last month, Eden made her return to the historic Exit In and played her first Nashville headline show to a packed audience at the venue from which she was originally signed. In June, she surprised the Opry House with a guest appearance from Trisha Yearwood during her set. After a stunning performance from Brooke of her latest songs, “No Shade” and “Sunroof,” Brooke began her performance of her country classic pick, Yearwood’s “She’s In Love With The Boy.” After the first chorus, Trisha appeared and suggested they do a gender flip of the song to highlight Pride month and Brooke’s recent engagement, continuing their historic duet as “She’s In Love With The Girl.”